Excellent rulings are the result when a law firm limits the number of clients being defended at any given time. Put Improper Handling of Firearms Attorney Robert Stiefvater’s experience and proven track record to work for you. Robert’s Improper Handling of Firearms Defense Law Firm focuses on the needs of each client and establishes an appropriate defense of each improper handling of firearms charge. Stiefvater Law has quickly become the go to law firm for people charged with the improper handling of firearms. 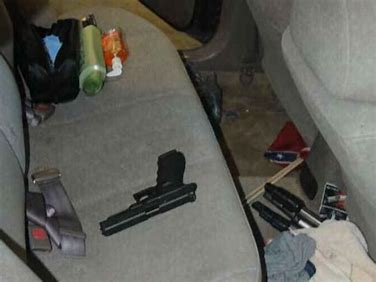 It is considered Improper Handling when you do any of the following:

Discharge a firearm from a motor vehicle;

Transport a loaded firearm in a motor vehicle;

Transport a firearm improperly in a motor vehicle;

Transport a firearm in a motor vehicle while under the influence of drugs or alcohol; or

Fail to inform an officer that you are transporting a firearm.

The following can be a statutory defense to Improper Handling of a Firearm but are very fact specific:

If you are an officer of the law;

If you are employed in Ohio and authorized to carry a firearm;

Depending on ownership of the land upon which the incident occurred; or

Having a valid CCW permit.

Contact Improper Handling Firearms Defense Attorney Robert Stiefvater to discuss whether or not any of these defenses apply to your situation.

Stiefvater Law has established itself at the go-to Improper Handling of Firearms in a Motor Vehicle Defense Law Firm in Montrose-Ghent, Ohio. Call today and get results. Find out why other attorneys refer clients to us. Our defense of you starts with your phone call.

Ohio Revised Code (ORC) Section 2923.16 governs Improperly Handling Firearms in a Motor Vehicle. The language below comes from the ORC:

(A) No person shall knowingly discharge a firearm while in or on a motor vehicle.

(B) No person shall knowingly transport or have a loaded firearm in a motor vehicle in such a manner that the firearm is accessible to the operator or any passenger without leaving the vehicle.

(C) No person shall knowingly transport or have a firearm in a motor vehicle, unless the person may lawfully possess that firearm under applicable law of this state or the United States, the firearm is unloaded, and the firearm is carried in one of the following ways:

(2) In a compartment that can be reached only by leaving the vehicle;

(3) In plain sight and secured in a rack or holder made for the purpose;

(4) If the firearm is at least twenty-four inches in overall length as measured from the muzzle to the part of the stock furthest from the muzzle and if the barrel is at least eighteen inches in length, either in plain sight with the action open or the weapon stripped, or, if the firearm is of a type on which the action will not stay open or which cannot easily be stripped, in plain sight.

(D) No person shall knowingly transport or have a loaded handgun in a motor vehicle if, at the time of that transportation or possession, any of the following applies:

(1) The person is under the influence of alcohol, a drug of abuse, or a combination of them.

(2) The person's whole blood, blood serum or plasma, breath, or urine contains a concentration of alcohol, a listed controlled substance, or a listed metabolite of a controlled substance prohibited for persons operating a vehicle, as specified in division (A) of section 4511.19 of the Revised Code, regardless of whether the person at the time of the transportation or possession as described in this division is the operator of or a passenger in the motor vehicle.

(E) No person who has been issued a concealed handgun license or who is an active duty member of the armed forces of the United States and is carrying a valid military identification card and documentation of successful completion of firearms training that meets or exceeds the training requirements described in division (G)(1) of section 2923.125 of the Revised Code, who is the driver or an occupant of a motor vehicle that is stopped as a result of a traffic stop or a stop for another law enforcement purpose or is the driver or an occupant of a commercial motor vehicle that is stopped by an employee of the motor carrier enforcement unit for the purposes defined in section 5503.34 of the Revised Code, and who is transporting or has a loaded handgun in the motor vehicle or commercial motor vehicle in any manner, shall do any of the following:

(5) Knowingly disregard or fail to comply with any lawful order of any law enforcement officer given while the motor vehicle is stopped, including, but not limited to, a specific order to the person to keep the person's hands in plain sight.